Using new microscopic methods in combination with machine learning-based image analysis, researchers from Freiburg have discovered new structures on the surface of living B cells that affect the distribution and possibly the function of their antigen receptors. The researchers' study has been published in The EMBO Journal. 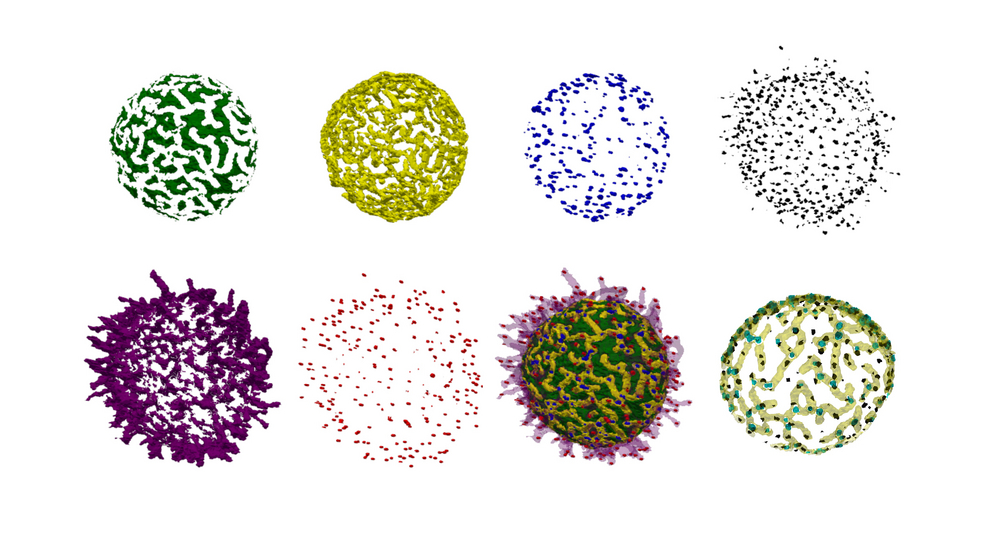 B cells are a crucial part of our immune system and recognize pathogens through specialized receptors on their surface. Scientists from the University of Freiburg could now observe how these receptors are distributed on the surface of living and moving cells. They found that the B cell surface is shaped into a characteristic landscape of interconnected ridges and protrusions. On this landscape, the IgM-class B cell antigen receptors (IgM-BCR) accumulate in specific areas. The precision of the receptors’ localization and their clustering into larger units likely constitute a mechanism that controls receptor signaling and facilitates antigen sensing and thereby the activation of B cells.

The surface of B  lymphocytes is structured

In most immunological textbooks, lymphocytes are depicted as round, ball-like cells whose smooth surface carries randomly distributed receptors. The notion of a smooth unstructured B cell surface has already been challenged by electron micrographs of fixed and frozen lymphocytes, revealing thin membrane protrusions called microvilli on the cells’ surface. These tentacle-like structures help immune cells to search for molecular markers of pathogens, so-called antigens. B lymphocytes recognize such antigens through different classes of their B cell antigen receptors (BCR). These antigen receptors are complex molecular machines that, when activated, interact with other molecules to initiate a signaling cascade, leading to the differentiation of B cells into plasma cells and the production of protective antibodies.

Images of living cells at a very high speed

The research group of Prof. Dr. Michael Reth from the Clusters of Excellence BIOSS and CIBSS – Centre for Integrative Biological Signalling Studies at the University of Freiburg collaborated with the group of BIOSS and CIBSS researcher Prof. Dr. Ralf Reski, researchers at Euro-BioImaging (EMBL) and researchers at the University of Osnabrück/Germany to analyze how the IgM-BCR is distributed across the 3D surface of living B cells. For this, they used a technique called lattice light sheet microscopy, LLSM for short. “This method can capture volumetric images of living cells at a very high speed,” explains Dr. Deniz Saltukoglu from Freiburg University, the first author of the study. “In other types of high-resolution microscopy, cells need to be attached to a flat surface, which completely alters the B cells’ outer structures. LLSM allowed us to observe the cells in an environment that mimics biological tissues, meaning that the structures and movements that we saw were largely undisturbed,” she says.

The researchers then developed custom image analysis tools to quantify and objectively characterize the microscopic data. “We needed to segment the images and isolate morphological features,” describes Saltukoglu. “So far this had only been done with two-dimensional data, so we had to develop new computational tools for volumetric, time course data.” For this, the researchers drew inspiration from algorithms that are used to map geographical data for archeological surveys. With this approach, they found that the B cell surface carries a network of elevated ridges, with microvilli growing from the intersections of the network. Within this “cellular landscape”, the IgM-BCRs form clusters that concentrate along the ridges, in close proximity to the bases of the microvilli. The position of these clusters was linked with the dynamic movement of the ridges on the cells’ surface.

“We think that the 3-D location of the antigen receptors controls their activity,” says Reth. “Localization at the microvilli base may prevent their unwanted activation. Once B cells receive a danger signal, they extent their microvilli and we assume that the IgM-BCR clusters then get recruited to the tip where they are localized in an optimal position for antigen sensing.” This hypothesis is in line with other findings from Reth’s group, which suggest that the IgM-BCRs are regulated via lateral interactions with regulatory coreceptors. This means that the position and distribution of antigen receptors likely represent additional control mechanisms that affect signaling and activation of cells of the immune system.