A remote control for gene transfer

The ability to insert desirable genes into animal or human cells is the basis of modern life science research and of widespread biomedical applications. The methods used to date for this purpose are mostly non-specific, making it difficult for scientists to control which cell will or will not take up a gene. For this gene transfer, the target genes are often packaged into “viral vectors.” These are viruses in which part of the genetic material has been replaced by the target genes. When researchers add these viral vectors to cells, the vectors introduce the genes into the cells. This is the principle behind some of the current SARS-CoV-2 vaccines such as those from AstraZeneca or Johnson&Johnson. However, it is difficult - even impossible - to control into which cells the target genes enter, since the viral vectors tend to dock non-specifically onto all cells of a certain cell type. A team of researchers from the Cluster of Excellence CIBSS - Centre for Integrative Biological Signalling Studies at the University of Freiburg, led by Dr. Maximilian Hörner, Prof. Dr. Wolfgang Schamel and Prof. Dr. Wilfried Weber, has developed a new technology that enables them to introduce target genes in a controlled manner and thereby control processes in individual selected cells. The researchers have published their work in the current issue of Science Advances. 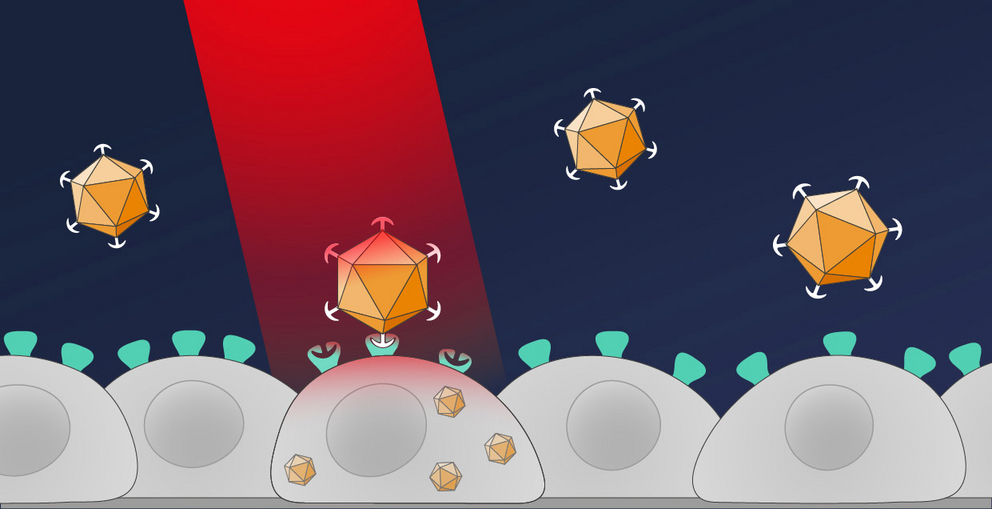 In their new method, the Freiburg researchers introduce the genetic information with an optical remote control. As a result, only cells that are illuminated with red light take up the desired genes. Illustration: Michal Rössler

Alteration to a viral vector

In their new method, the Freiburg researchers introduce the genetic information with an optical remote control. As a result, only cells that are illuminated with red light take up the desired genes. To do this, the scientists modified a type of viral vector known as an AAV vector, which is already in clinical use. "We took away the viral vector's ability to dock with cells," Hörner explains, "which is an essential step before the genetic material can be introduced."

To enable this control by light, the researchers have taken a red light photoreceptor system from the plant Arabidopsis thaliana (thale cress). This system consists of two proteins, PhyB and PIF, which bind to each other as soon as PhyB is illuminated with red light. The Freiburg team placed the protein PIF on the surface of the viral vector and modified the other protein PhyB so that it could bind to human cells. Once this modified vector, called OptoAAV, is in a cell culture along with the cell-binding protein, the protein binds to all cells. "If a selected cell is now illuminated with red light, the modified vector can bind to this cell and introduce the target genes into the illuminated cell," Hörner explains.

This new approach allows the researchers to introduce target genes into the desired cells within a tissue culture. The scientists also succeeded in illuminating the tissue culture successively at different locations, thus enabling the targeted introduction of different genes into different cells within a culture. With this technique, it is now possible to control desired processes in individual cells. This is essential for understanding how a single cell communicates with cells in its environment, for example, to control the development or regeneration of an organ. "As these viral vectors become more widely used in the therapeutic field," Weber says, "we think this new technology has the potential to make such biomedical applications more precise."

Researchers in the Cluster of Excellence CIBSS - Centre for Integrative Biological Signalling Studies at the University of Freiburg are investigating the fundamental communication processes that determine multicellular life in humans, animals and plants. In this way, they aim to gain a higher-level, integrative understanding of biological signaling processes in order to develop tailored molecular tools using methods from synthetic and chemical biology to precisely control signaling processes. In this way, the researchers seek to develop strategies for the treatment of cancer using immunotherapies or for resource-conserving crops production, among other things. Maximilian Hörner and Wolfgang Schamel are group leader in the Cluster of Excellence, Wilfried Weber is a member of the speaker team.