Actin affects the spread of cancer in several ways

The transport of molecules along the cell’s skeleton plays a role in cancer metastasis, Freiburg researchers show

Metastases occur when cancer cells leave a primary tumor and spread throughout the body. For this, they have to break connections with neighboring cells and migrate to other tissues. Both processes are promoted by signalling molecules released by the cancer cells, which thereby increase the malignancy of tumors. A research team led by Prof. Dr. Robert Grosse and Dr. Carsten Schwan from the University of Freiburg found that the release of these so-called prometastatic factors is influenced by the cells’ skeleton. The study was published in Advanced Science. 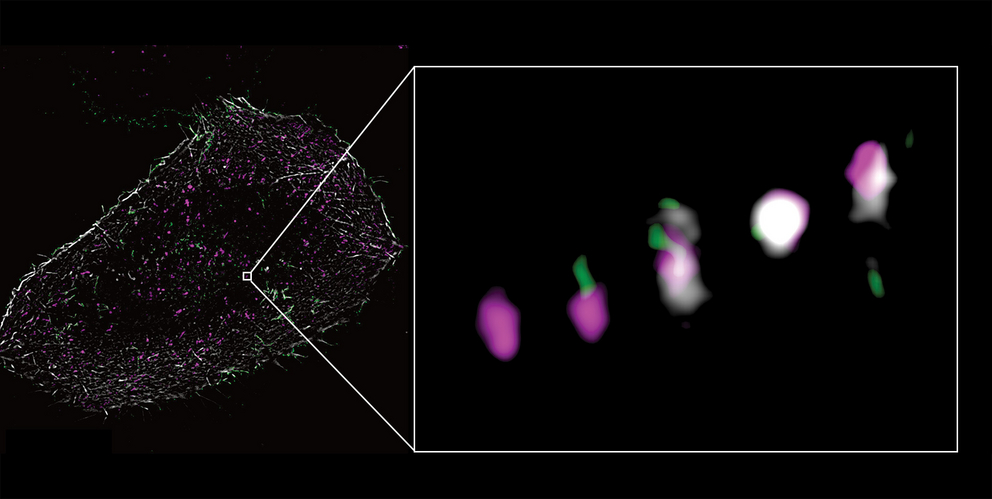 Super-resolution microscopy image of a cell. With fluorescent markers the prometastatic factor ANGPTL4 is labelled in magenta, the molecule FMNL2 in green, and the actin cell skeleton in white. The blow-up shows a single vesicle containing ANGPTL4 at several consecutive time points. FMNL2 (green) induces the polymerization of actin filaments (white) at the vesicle, propelling it forward. The vesicle itself is only about 200 nanometers in diameter. Image: Dennis Frank / Universität Freiburg

Actin filaments are part of the cell skeleton and essential for stability and motility. They form a network that dynamically builds up and gets broken down by the addition or detachment of building blocks at the filaments’ ends. These processes are precisely regulated by other molecules, such as so-called formins. The dynamics of the actin-network enable the locomotion of cells, for example during development or wound closure, but also that of spreading cancer cells. Actin also plays a role in the transport of substances within the cell. However, this is less well understood than that of other intracellular transport mechanisms.

The Freiburg researchers now found that the actin-network also enables the release of prometastatic factors. For their study, they used high-resolution microscopy to track the movement of individual transport vesicles within living cancer cells. “We observed that ANGPTL4-loaded vesicles are conveyed to the periphery of the cell by means of dynamic and localized polymerization of actin filaments,” says Grosse, who is a member of the Cluster of Excellence CIBSS – Centre for Integrative Biological Signalling Studies at the University of Freiburg. ANGPTL4 is an important prometastatic factor that promotes the formation of metastases in various types of cancer.

FMNL2 controls the transport of ANGPTL4 along actin filaments

Based on the microscopic observations and genetic analyses, the scientists conclude that the vesicles’ movement is controlled by the formin-like molecule FMNL2 by initiating polymerization – i.e. elongation – of actin filaments directly at the vesicle. “We already knew that increased FMNL2 activity has prometastatic effects in many types of tumors,” says Grosse. “In our current work we could now demonstrate an important underlying process and a connection to the TGFbeta signalling pathway.” According to the scientist, this knowledge could be used for tumor diagnostics or therapy. for example, by developing an antibody that indicates the presence of active FMNL2 or pharmacologically targets active, phosphorylated FMNL2.