How Cells Find the Right Partners

During the growth and development of living organisms, different types of cells must come into contact with each other in order to form tissues and organs together. A small team working with Prof. Dr. Anne Classen of the Excellence Cluster CIBSS – Centre for Integrative Biological Signalling Studies of the University of Freiburg has discovered that complex changes in form, or morphogenesis, during development are driven exclusively via the affinity of cells to each other. The researchers examined the egg chambers of fruit flies (Drosophila melanogaster) and combined genetic methods and mathematical modeling in their work. The study has been published in the scientific journal Nature Communications.

The lead author of the study and a member of Classen’s lab, Dr. Vanessa Weichselberger, summarized the team’s work: “We wanted to find out how different types of cells organize their morphogenesis with each other in order to form functional units.”  She continues, “The egg chamber is a good example, because within it, different cell populations must self-organize into functional units.” The egg chamber is the structure in which an immature egg cell, or oocyte, matures until it is ready for fertilization. Drosophila’s egg chamber looks like a tiny football. Inside, the growing egg cell is located on one side, and on the other are 15 nurse cells that provide nutrients for the immature egg cell. In order to produce an egg, the egg cell must mature, while the nurse cells are ultimately removed.

Both processes – the maturation of the egg cell and the removal of the nurse cells, are dependent on an external layer of epithelial cells. For this purpose, the epithelial cells are divided into specialized groups, which – based on their function – must either make contact with the nurse cells or the egg cell. This partnering between the inner and outer cells is a complex process which takes place while simultaneously the size relationships within the egg chamber continually change. “Until now, the mechanisms that could robustly control such a dynamic process were unknown,” says Classen.

Eya controls the affinity of cells 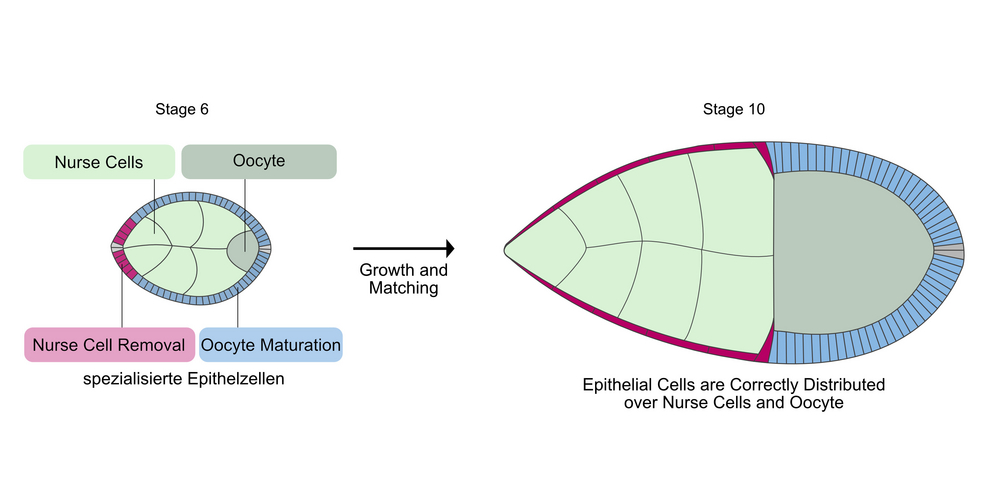 In order to test their hypothesis, the developmental biologists used mathematical models. To do this, they worked with Prof. Dr. Patrick Dondl of the Faculty of Mathematics and Physics of the University of Freiburg. Dondl created mathematical models that could simulate different degrees of mechanical affinity between the cells. “The mathematical models allowed us to show that a change in affinity dependent on Eya levels was sufficient to control the complex process of matching cell types,” explains Weichselberger. “That meant that we could use Eya as a set screw to genetically control partner location,” she says.

This mechanism is not limited solely to the egg chamber. The development of sperm cells in Drosophila males is also dependent on Eya. Here, too, the protein Eya controls the affinity between the developing, interior sperm cells and the exterior epithelial cells. It is unclear if these results can also be applied to other animals or humans. But comparable structures and developmental processes during oogenesis in other species make this seem possible.