Fingers Made of Laser Light: Controlled Grabbing and Rotation of Biological Micro-Objects

We can test the quality and freshness of fruits and vegetables with our fingers, and even industrial robots have been performing successfully at tactile applications for years. But how is it possible to grab and rotate objects with the width of a human hair? Prof. Dr. Alexander Rohrbach from the University of Freiburg’s Department of Microsystems Engineering and his team have now published a study on this question in the journal Nature Communications. Their work demonstrates how several optical tweezers made of highly focused laser light will one day be able to grab cell clusters in a controlled manner and rotate them in any desired direction. This will allow tiny objects like miniature tumors to be studied more specifically under the microscope. 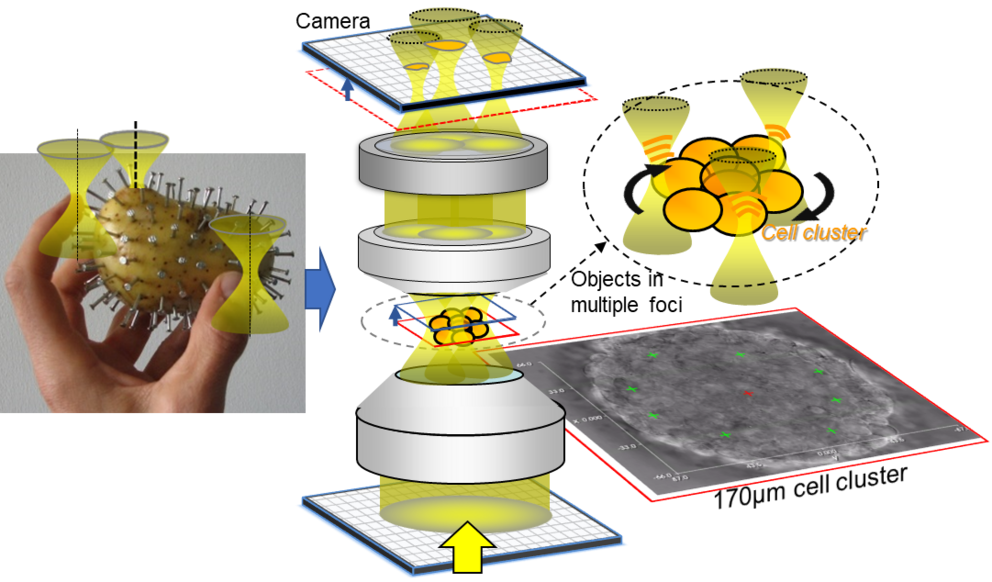 Optical tweezers are like fingers of light capable of rotating objects in the microcosm. That is only possible if the fingers do not grab blindly but find the right grabbing position. Through the analysis of scattered, defocused light on a camera, it will be possible in the future to rotate cell clusters in any direction in a controlled manner in order to study them more specifically under microscopes. Photo: B. Landenberger, Yatish, A. Rohrbach, Nat. Comm. (2021).

Fingers Made of Laser Light

In the laboratory, the grabbing fingers correspond to so-called optical tweezers, which are generated from highly focused laser light. The distinctive advantage of light tweezers is that, unlike mechanical tweezers, they can exert forces or torques even when grabbing through transparent objects.

Computer-holographic optical tweezers capable of focusing laser light pixel by pixel in arbitrary and multiplied configurations have been used for years to control the positions of several grabbing fingers of light simultaneously in 3D space. This method has existed in research laboratories for almost two decades but is incapable of exerting forces and torques on larger objects, that is, ones with a diameter larger than approximately 1/10 mm. The tweezers encounter difficulties because the objects are too large and sluggish to be rotated in an arbitrary and stable manner in an aqueous solution, as the optical tweezers are either not strong enough or fail to find a good grabbing position and therefore slip off. Remarkably, the reason why they fail to find the best grabbing position is because they do not look for it at all but grab blindly, relying on the ability of the researchers attempting to position the optical tweezers.

The Concept of Non-Blind Optical Tweezers

“Non-blind tweezers see what they are grabbing at by measuring and analyzing the light scattered on the object,” Rohrbach explains. “We see various objects with our eyes because sunlight or indoor light is scattered on them and reproduced on our retina.” Laser tweezers can grab through transparent objects. However, the biological research objects scientists study under the microscope, such as cell clusters like miniature tumors or small fly embryos, are not completely transparent but behave like frosted glass in a bathroom window, where the light is diffuse after transmission and thus difficult to analyze. The new concept for seeing where the tweezers are reaching is to analyze the defocused laser-scattered light on a fast camera behind the object, which serves as a feedback signal. The more asymmetrical the spots of light of the individual light tweezers on the camera are, the more the light at the focus is scattered, leading to a greater change in the refractive index at the respective point in the object. These are the points at which the optical tweezers can efficiently grab at the object. In terms of physics, a local change in the polarization of the matter leads to an increased optical dipole force.

According to Rohrbach, the astounding thing about the principle of localizing the best grabbing position is that the light scattering – that is, the change in momentum – is much stronger directly in the laser focus than that in front of or behind the focus. Each of the approximately five to ten optical tweezers should feel the best grabbing position on the basis of the scattered light in order to rotate the object in different directions. If one of the tweezers exerts too much force, however, the other tweezers can lose their hold. “This is a highly complex optimization problem that we will be puzzling over for some years to come,” says Rohrbach. His vision is that in the case of success the principle of contactless sample holding will be integrated into the microscopes of the future.

The research project was funded within the context of the Freiburg Clusters of Excellence BIOSS and CIBSS.