For their anniversary together, biologist Edoardo Romano gave his girlfriend something homemade: a black-and-white snapshot of the couple that only looks like a classic keepsake at first glance. In fact, the photo is a small biological work of art, containing the work of millions of microorganisms. It shows a layer of bacteria in a petri dish that depicts the couple thanks to fluorescent proteins. Exposed through a mask of the souvenir photo, the bacteria in the bright areas of the image activate molecules that appear green under a fluorescent microscope - of which Romano snapped a photo and printed it out. "This synthetic protein is our latest optogenetic tool: we have named it BLADE," explains Prof. Dr. Barbara Di Ventura, Professor of Biological Signalling Research at the University of Freiburg, where Romano is doing his PhD. 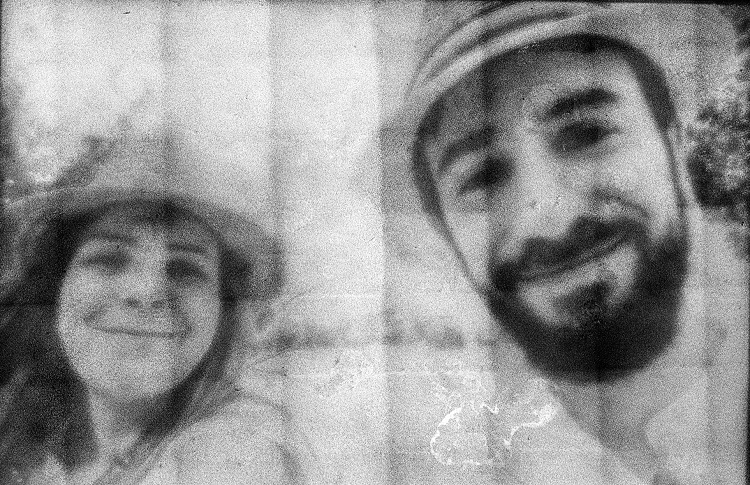 A special photo gift thanks to a new optogenetic tool: it's not a classic snapshot, but a bacterial layer in a petri dish, imaging the pair thanks to fluorescent proteins. Photo: Edoardo Romano

Di Ventura's research area is synthetic biology. She is a member of the Cluster of Excellence CIBSS - Centre for Integrative Biological Signalling Studies at the University of Freiburg and holds one of the core professorships at BIOSS - Centre for Biological Signalling Studies. Recently, her research group published a study on the BLADE system in the journal Nature Chemical Biology. One of the illustrations shows such a so-called bacteriography. Not without a twinkle in their eyes, the researchers used a well-known pop culture reference from science fiction in this case: they reproduced a poster from the classic film "Blade Runner" with the bacterial cultures - as accurately as if it were a photocopy.

As an engineer and biologist in the field of synthetic biology, Di Ventura is one of those who overhaul the present rather than produce science fiction: She works on future technologies to create something useful, especially for basic research: "There's a lot of inventiveness in the field of synthetic biology," she explains. "First come the gimmicks, like this image, but behind them are exciting tools that make new discoveries in signalling research possible." The bacteriography images show how precisely the molecular complexes Di Ventura put together respond: Signals, such as light beams in this case, activate a molecule that binds to DNA, where it acts as a so-called transcription factor - meaning it controls gene expression: in the course of this process, the cellular machinery reads out genes and converts them into RNA, and eventually into proteins. "Gene expression is the reason why all the cells of an organism have the same genome but can perform completely different functions," Di Ventura describes. To create the bacteriography, Romano's bacterial cells were given a piece of gene in the lab that encodes a fluorescent protein. When BLADE is activated by blue light, part of the inserted molecular construct binds to the DNA and the transcription factor increases the production of the green fluorescent protein. But this only happens to the bacterial cells in the Petri dish that are irradiated with light. "We stuck a mask of the image on the plastic lid of the dish - a kind of stencil. In the photo, the translucent areas now glow green. The resolution is unique," Di Ventura reports.

The new technique allows the researcher, for example, to fathom the functions of some genes in coliform bacteria particularly quickly. One would think that the genome of the bacterium Escherichia coli, which is probably at home in every molecular laboratory in the world, has been completely decoded by now. But the function of about 35 percent of the genes has not yet been researched. If biologists insert another gene instead of fluorescent proteins as a target gene for the optogenetic tool, its expression can be activated in a light-controlled manner. The researchers can see how the gene products affect the cell - for example, if it is a digestive enzyme for a sugar, it stimulates the growth of the bacteria. But optogenetics could also be applied to humans. "For the treatment of organs near the surface of the body, such as the eye, such optogenetic techniques can already be used recently, but their main use is still clearly basic research," says Di Ventura.

The many different synthetic biology tools that the research group develops are used worldwide to analyse biological signals. But Di Ventura is also personally dedicated to researching transcription factors. She uses such "control-of-function" applications, for example, as part of the CIBSS Cluster of Excellence. "We want to understand the dynamics of the transcription factor NF-B with the help of optogenetics," she explains. To this end, she is working with the physician and immunologist Prof. Dr. Bodo Grimbacher from the University Medical Centre Freiburg, among others.

The term "dynamics" here refers to the question of how the production or movement of molecules changes within cells: Are they cyclically built up and degraded? Does transport between different parts of the cell change their effect? NF-B and other molecule-mediated signals in the cell are important for the immune response and programmed cell death. NF-B, for example, is transported into the cell nucleus and out again. There, these proteins influence gene expression: "And this is where we can approach cell cultures with optogenetics and specifically channel the transcription factor out of the nucleus and back in again with a molecular switch that reacts to light," Di Ventura elaborates. "This is how we understand how this signalling chain controls the cell in detail. It's important to understand these signalling steps in detail - for immunology and cancer research." 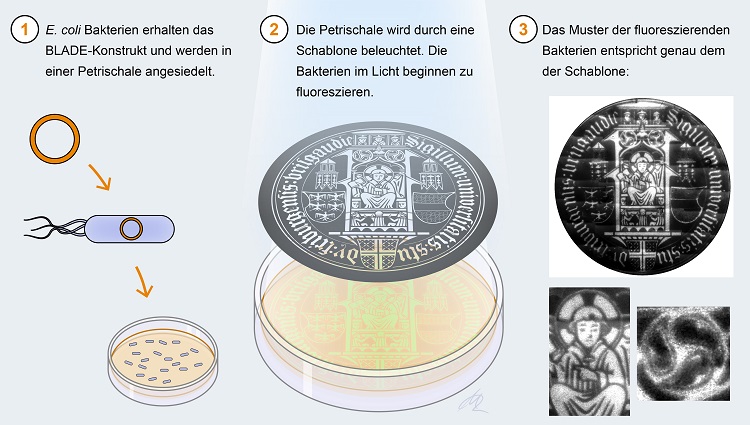 (1) E.coli bacteria contain the BLADE construct and are placed in a Petri dish. (2) The Petri dish is illuminated by a template. The bacteria in the light start to fluoresce. (3) The pattern of the fluorescent bacteria corresponds exactly to that of the template. Graphic: Michal Rössler, University of Freiburg

Di Ventura's inventions and research results are mostly based on so-called biological circuits and oscillators. They describe control systems, cyclical reaction chains and processes that take place in the cell, repeat themselves and react to external stimuli - like a heating thermostat that adjusts the heating power to the outside temperature and the inside temperature, except that Di Ventura's systems consist of proteins, receptors and genes. Through these circuits, transcription factors influence cell activity and adapt it to environmental stimuli.

"Reprogramming simple organisms like bacteria or yeasts for the benefit of humans and for the environment is one possibility of synthetic biology," Di Ventura describes her field of research. Researchers can use it to produce alternative energy sources, for example, or to develop sensors for hazardous substances or to enable the decontamination of the environment. "Of course, we have to be very careful about the ability to create organisms that have new properties," Di Ventura points out. For her, the ethical aspects of synthetic biology are just as important as the actual biological research. "But in medicine, our synthetic biology tools could lead to more precise therapies for cancer, for example. That's what we'll be working on next," she adds. She wants to introduce optogenetic circuits specifically into tumour cells to destroy the cells on the spot, via the body's own signalling pathways that trigger the cells' self-destruction mechanism. "Here we are still at the very beginning. We first want to use optogenetics, i.e. light as a trigger, to show in cell cultures that the principle has potential.

To explore and research this potential, Di Ventura received a two million euro Consolidator Grant from the European Research Council (ERC) in 2020. The project is called "InCanTeSiMo - Intelligent Cancer Therapy with Synthetic Biology Methods". Common chemotherapies against cancer usually act throughout the body and not exclusively on the tumour and in the cancer cells. This often means that patients suffer from severe side effects. The targeted therapy of cancer with biological circuits from synthetic biology could be helpful here, but so far it is still a thing of the future.

For Di Ventura, the big challenge in her new project is to develop a molecular vehicle that supplies exactly the right cells and can introduce biological circuits built from networks of synthetically produced proteins. Then the therapy could be launched in a targeted manner. "Light would be just one of many ways to switch on the circuits. We have a large selection of molecular switches that we could incorporate," the researcher explains. Certain drugs, for example, would also come into question here. The research work is just beginning, and Di Ventura's team is growing. Inventiveness is also needed for this project - but this time with the goal of a concrete medical implementation. "This is typical for synthetic biology: what began with gimmicks in Escherichia coli bacteria leads to real technological applications," says the researcher. And maybe even one day into a new form of cancer therapy.

studied Computer Engineering at the University La Sapienza in Rome/Italy. In 2007, she received her doctorate in synthetic biology at the European Molecular Biology Laboratory in Heidelberg. From 2007 to 2011, Di Ventura was a postdoctoral researcher at the Centre for Molecular Biology at Heidelberg University. She then headed the synthetic biology working group at the BioQuant Centre there. Since 2017, she has been a professor of biological signalling research at the Faculty of Biology at the University of Freiburg and at BIOSS - Centre for Biological Signalling Studies. There she heads Research Area C: Reconstruction and Biotechnology. Since 2019, she has also been a member of the Cluster of Excellence CIBSS - Centre for Integrative Biological Signalling Studies. In 2020, she received a Consolidator Grant from the European Research Council (ERC) for the research project InCanTeSiMo.