Research team from Universities of Freiburg and Nagoya, Japan identifies what determines the site of cell division in plants.

For a new plant to grow from a seed, cells need to divide numerous times. Daughter cells can each take on different tasks and sometimes vary in size. How plants determine the plane of cell division in this process, known as mitosis, is being researched byProf. Dr. Ralf Reski and Dr. Elena Kozgunova from the University of Freiburg in a joint effort with Prof.Dr. Gohta Goshima fromNagoya University. Working with Physcomitrella – a moss plant, they have now identified how the mitotic apparatus is localized in the plant cell: “Using moss cells, we were able to observe an unexpected process that is important for the position of the cell division site in plants. The process could be far more similar to animal cell division than previously thought,” Reski from the cluster of excellence CIBSS comments on the results of the study, which has appeared in the journal Nature Communications. 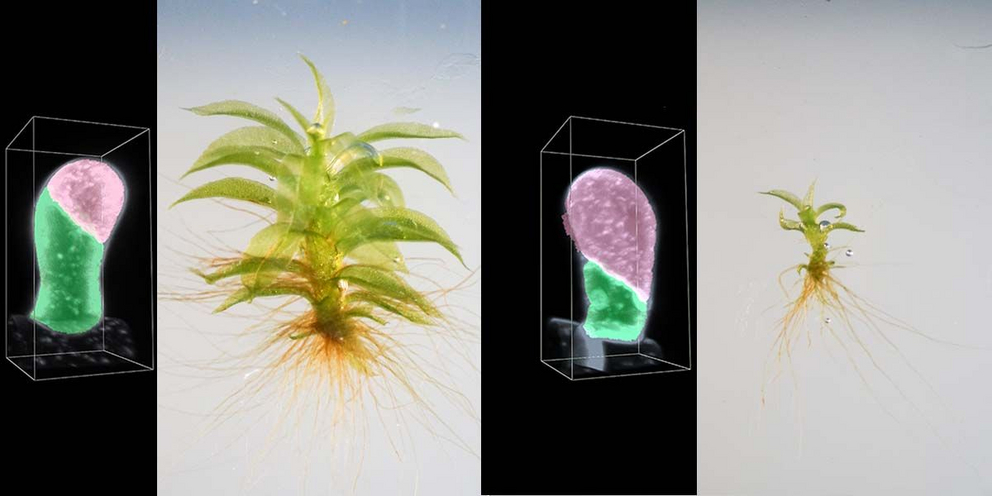 When cells divide, microtubules – a dynamic network of protein filaments – form a mitotic spindle that draws the chromosomes apart and arranges them into two daughter cells. Here, plants and animals differ: once the spindle is formed, it remains in the same place in plant cells. In animal cells, the spindle moves during cell division. The cells divide where it comes to rest. The unusual thing about moss cells is that in the process of mitosis they do not form a belt of microtubules and actin filaments, both elements of the cytoskeleton. Until now, it was thought that this ‘preprophase band’ (PPB) determines where the spindles form and where they are localized in plants. “But why is the mitotic spindle static in moss cells like in other plants even though there is no preprophase band?” wondered Kozgunova, lead author of the study and holder of a Humboldt-Bayer research fellowship in Reski’s laboratory.

To solve this puzzle, the team delved into the molecular biology box of tricks: they modified spreading earthmoss (Physcomitrella) plants, removing five genes. The researchers knew that they resemble the animal gene of a molecule that is significant in mitosis: the protein TPX2 takes part in mitotic spindle assembly in animals.

Under the microscope, the researchers observed mitosis in moss plants without the TPX2 genes. They were startled to find that in these cells the spindles now moved during cell division in leafy shoots known as gametophores. “Spindle movement had never been documented before in plant cells,” explains Kozgunova. Such cells divided irregularly, and as the plant developed, it led to malformations.

Tug-of-war in the cytoskeleton

The researchers now proceeded to influence the actin skeleton of the cells and showed that actin filaments move the mitotic spindle: “It’s a kind of tug-of-war between microtubules and actin that positions the mitotic spindle in the cell. It appears to be similar to the processes in animal cells,” reports Reski. Likewise, actin filaments are important for spindle transport in animal cells. These findings are helping researchers to identify which signals determine the fate of cells as they develop. They hope that this will improve understanding of plant growth and eventually our ability to influence it.

The recordings of the cell division were produced in the Life Imaging Centre, a central facility of the Cluster of Excellence CIBSS – Centre for Integrative Biological Signalling Studies at the University of Freiburg.