Plant growth is not a uniform process: Plants grow in length at the shoot and root tip in particular, while in other places they form new leaves or flowers. These different processes must be coordinated with each another and at the same time react to external influences such as temperature and light. The plant hormone auxin is an important integrator in this regard: The molecule functions as a growth signal whose concentration and thus signaling output change according to the environmental conditions of the plant. A research team led by Prof. Dr. Jürgen Kleine-Vehn from the Cluster of Excellence CIBSS – Centre for Integrative Biological Signalling Studies at the University of Freiburg has now identified a regulatory mechanism that balances out excessive amounts of auxin in plant cells. The results of the researchers from Freiburg and the University of Natural Resources and Life Sciences in Vienna, Austria, were published as a research highlight in the journal Development. 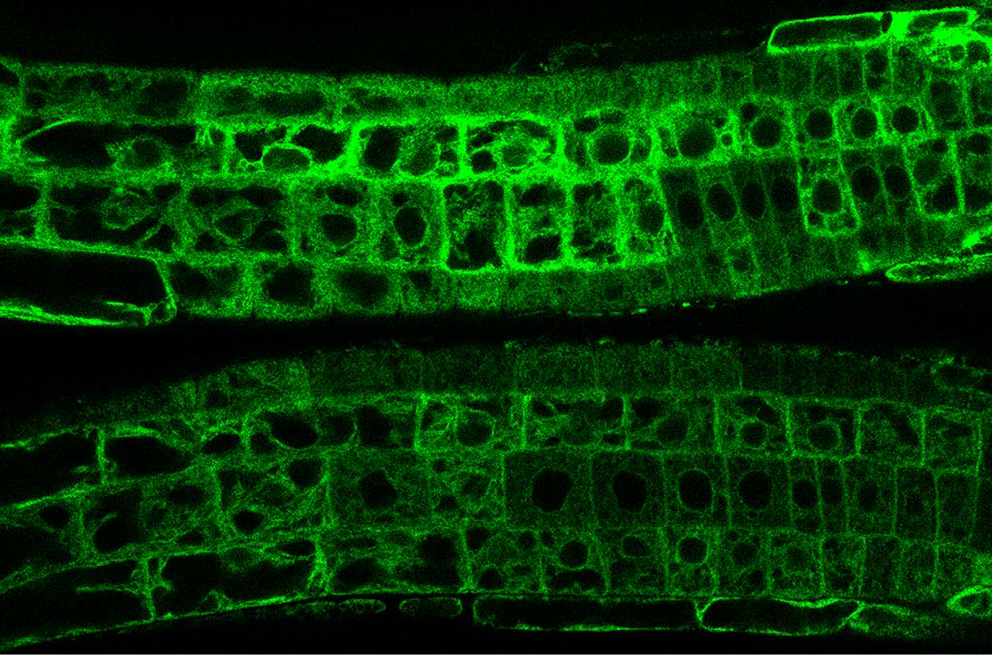 The molecule auxin gives the signal for cell division and cell elongation in plant cells by regulating the gene activity in the nucleus. The precise effect depends on the particular tissue and the interplay with other hormones and signals. The level of auxin concentration in the nucleus is particularly important. “The concentration of auxin has a crucial effect on plant growth but is at the same time subject to great fluctuations, since it is influenced by so many different factors,” explains Kleine-Vehn. “The plant cell therefore needs regulatory processes to balance out some of these fluctuations.”

The researchers discovered such a process while investigating the influence of the so-called PILS proteins on auxin. These transport proteins can transport auxin into the endoplasmic reticulum (ER), a closed structure within the cell, from where it can no longer enter the nucleus. “The auxin is thereby muted, so to speak,” adds Kleine-Vehn. In a previous publication, he and Dr. Elena Feraru from the University of Natural Resources and Life Sciences, Vienna, who is also the lead author of the present study, already succeeded in demonstrating that PILS proteins influence the effect of auxin at high temperatures: The amount of PILS6 is reduced at higher ambient temperatures, allowing more auxin to enter the nucleus and stimulate root growth. That is important for the plant, because high temperatures often mean drought stress, and the longer roots reach the water in deeper regions.

“In the present study, we were actually looking for mechanisms that change this PILS-dependent heat response,” describes Kleine-Vehn to explain how they arrived at the current results. The researchers were using a technique known as forward genetic screening to look for the genes that influence PILS6 protein abundance at higher temperatures. In doing so, they compared the amount of PILS6 in several thousand mutagenized seedlings.

Auxin influences the amount of PILS6

One of the identified genes, GASP1, had an influence on PILS6 but did not appear to be the temperature-dependent parameter the researchers were actually looking for. What the researchers noticed instead, however, is that auxin itself influences how much PILS6 is available. This results in a regulatory mechanism: When auxin levels are too high, there is more PILS6, which in turn transports more auxin into the ER, thus muting it. At low auxin levels, the amount of PILS6 decreases and more auxin can enter the nucleus. That explains why not every fluctuation in auxin concentration changes the growth program of a plant. This newly discovered mechanism could thus be a fundamental regulatory process for the stable growth behavior of plants.