The quietest stem cells are the most powerful

How hyaluronic acid protects your stem cells from proliferative stress

Blood stem cells, which are known to scientists as hematopoietic stem cells (HSCs), reside mainly within the bone marrow. These unique and rare cells are key for the production of blood throughout our lifetime, especially upon proliferative stress such as viral infections or injury which trigger blood stem cells to refuel our blood system with new cells. In the absence of stress, most blood stem cells remain inactive or dormant in order to protect their unique potential of generating mature cells within our blood. The laboratory of Dr. Nina Cabezas-Wallscheid at the Max Planck Institute of Immunobiology and Epigenetics in Freiburg has revealed a signalling axis that preserves this dormant state and regulates human blood stem cell function. The study by CIBSS member Cabezas-Wallscheid  and her collaboration partners is published in the journal Nature Cell Biology. 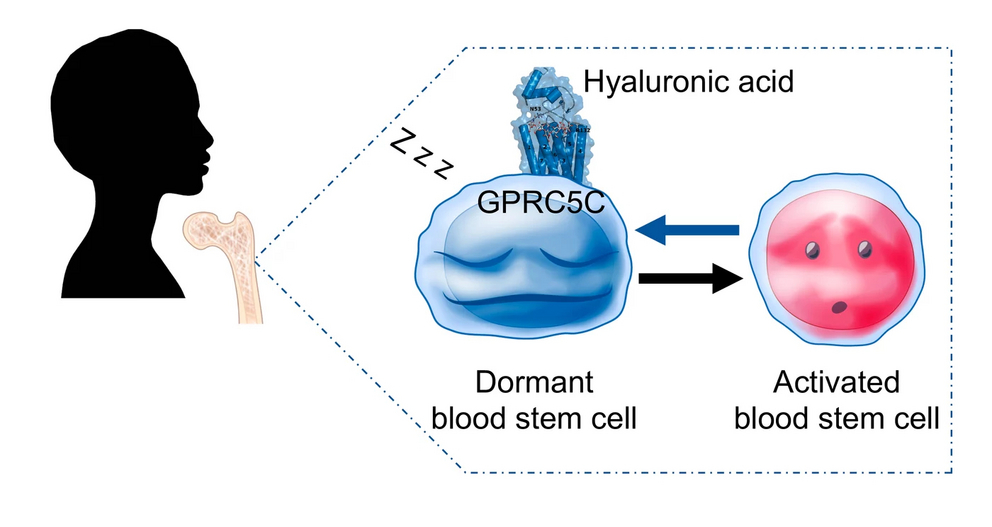 A rare population within humans HSCs

In the mouse hematopoietic system, HSCs are distinguished by their level of quiescence: dormant HSCs are in a deeper quiescent state and have the highest stemness properties when compared to active HSCs. However, in humans, this distinction has never been observed. Dr. Nina Cabezas-Wallscheid and her team study the human hematopoietic system to deepen our understanding of how the human body responds to stress. “Using state-of-art technologies like single-cell RNA sequencing, we were able to examine these rare HSCs at a much higher resolution. This approach allowed us to analyze hundreds of HSCs simultaneously, and we found that even within a highly purified HSC population there was still a high level of heterogeneity. We could observe that dormancy was one property that could explain some of this heterogeneity.” stated Dr. Nina Cabezas-Wallscheid.

The surface receptor named GPRC5C has previously been shown to be enriched in mouse dormant HSCs, although its function was unclear in humans. “Indeed, we found that GPRC5C enriches for human dormant HSCs, and that also plays a major role in regulating dormancy and, as a consequence, stemness” said Yu Wei Zhang, the study’s first author.

In her project at the cluster of excellence CIBSS - Centre for Integrative Biological Signalling Studies at the University of Freiburg Cabezas-Wallscheid studies the role of GPRC5C in regulating hematopoietic stem cells in mice. The new study elucidates how the signalling pathways analysed in this project translate to humans. Five CIBSS members are involved in the publication, including Dr. Susana Minguet from University of Freiburg and Prof. Dr. Dominic Grün from the Würzburg Institute of Systems Immunology, as well as Julian Meß, a CIBSS-Track doctoral student in Cabezas-Wallscheids lab. The cooperation was initiated inside the CIBSS community and is a great example of the exchange the cluster facilitates.