The Secret Recipe in the Genome

Freiburg researcher Asifa Akhtar demonstrates how epigenetics works: starting from the X chromosome of fruit flies, her results apply to humans as wells

The focus of Asifa Akhtar’s research is how the cell annotates and makes sense of the genome. She received the 2021 Gottfried Wilhelm Leibniz Prize from the German Research Foundation for elucidating epigenetic processes in fruit flies and humans.

Asifa Akhtar points to an image of a tangle of deep blue strings, the chromosomes. One of them stands out in bright yellow against the shimmering blue background. “This here is the X chromosome,” says the biologist, proudly presenting her favorite object of research. “Do you see the yellow markers? We say it’s decorated.” For the fruit fly, this beautiful decoration is essential for survival. The chromosomes we see under the microscope are bundles of DNA wrapped around special proteins called histones. In this form, scientist call this genetic material chromatin. While the blue dye labels all chromatin, the yellow decoration represents an epigenetic modification. Insights into so-called epigenetic modifications of the chromatin enables scientists to understand hereditary diseases and cancer in humans. These mechanisms determine how strongly a gene is expressed in the cell and in the body. Dr. Akhtar is convinced: “It’s also the key to explaining how our environment influences development and metabolism.” 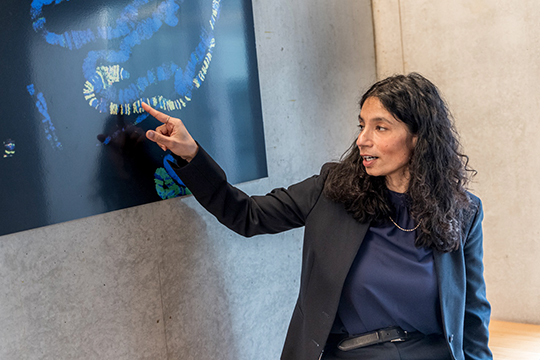 The molecular biologist conducts her research with her team at the Max Planck Institute of Immunobiology and Epigenetics in Freiburg. She is a member of the signalling studies research centres BIOSS and CIBSS and contributes to several Collaborative Research Centres at the university. Despite the restrictions she encountered in her work due to the pandemic, 2020 was a successful year for Dr. Akhtar. In the summer she was elected vice president of the Max Planck Society, and in December she received the Gottfried Wilhelm Leibniz Prize from the German Research Foundation for her outstanding work in epigenetics, the main focus of which was the X chromosome.

Gene products in the right dose

If the mechanism that decorates one of the X chromosomes is absent during fruit fly development, the male offspring will die. In both flies and humans, most chromosomes are found in pairs: one from the mother and the other from the father. The notable exception is the sex chromosomes. In mammals, males have one X chromosome and females two – “just like the fruit flies we are working with,” Dr. Akhtar explains. “Females therefore have two copies of the X chromosome genes, twice as many as males.” That presents a problem for the organism, because twice as many genes means that the cell produces twice as many of the proteins for which these genes code. Yet the researchers do not observe this imbalance. In reality, Dr. Akhtar explains, the epigenetic decoration in male flies boosts the production of proteins on their single X chromosome twofold to compensate for the males’ lack of a second X chromosome. In mammals, by contrast, this protein production is downregulated on one copy of the two X chromosomes in females. Thus, the organism achieves the optimal amount of gene products.

>The Freiburg biologist has been studying precisely how the balancing out of gene production at the X chromosome functions for 20 years. “It’s like an onion that you peel further and further: New aspects keep coming to light if you dare to look deeper.” The yellow markers on the image she showed are a protein complex: proteins that can regulate gene production and respond to signals. “Epigenetics allows for the adaptability of organisms,” Dr. Akhtar explains. The genes encoded by the genome are read differently depending on whether a stem cell grows into an intestinal cell or a nerve cell. “We now know that the dose of a gene product plays an important part in development and how the environment influences this development,” says Dr. Akhtar. Trisomies are well-known examples of how an extra chromosome and its higher gene dose significantly affect human development. A better understanding of epigenetic gene regulation also provides a basis for cancer treatments in humans since epigenetic landscape of chromosomes is altered in diseased state.

Commentary on the DNA

Many processes are now known to participate in the production of proteins. Epigenetics appears like a scribbled commentary on a recipe: more of this, less of that. In the case of the subject of Dr. Akhtar’s research, the X chromosome of the fruit fly, a tiny organic molecule – an acetyl group – is attached to histones, which are the proteins that hold coils of the DNA double-helix in shape in the cell. Histones act like curlers arranging the long ribbon of DNA. The chemical change produced by addition of the acetyl group causes the ribbon to detach somewhat from the curler so that the cell machinery can read the genes better – and more of the gene product is produced. “This acetylation, we found out next, by no means occurs only at the X chromosome,” Dr. Akhtar explains. “Thousands of genes are thus modulated – in humans exactly as in the fly.”

>But how does this protein complex identify which chromosome and which gene it needs to fix itself to? What molecular signals control the chemical markers? These are the questions Dr. Akhtar and her research group are addressing. They investigated the enzyme that controls these markers: a histone acetyltransferase named MOF – which stands for “males absent on the first”. MOF regulates the attachment of an acetyl group to the histone proteins. “This enzyme is found in many species. Thanks to comparisons across evolutionary stages, we understand exactly how this epigenetic regulation works.” Thus, Dr. Akhtar found out that a developmental disorder in humans is attributable to a change in such regulators – and raised hopes for a possible treatment for a rare disease that is named after her: The Basilicata–Akhtar syndrome involves delayed development of many organs, including the brain.

Beyond the cell nucleus

A few years ago, Dr. Akhtar discovered another side of MOF: The enzyme leaves its comments not only in the cell nucleus but also in the mitochondria, the so-called power plants of the cells. Here too there is DNA. And here too MOF regulates the gene production. “That was an especially thrilling discovery. We’re now working together with mitochondria experts at the University of Freiburg, including those at CIBSS, to understand how epigenetics influences metabolism,” she explains. The team has already found out that the enzyme controls both what Dr. Akhtar calls the housekeeping genes in the nucleus and cellular respiration genes in the mitochondria.

The scientist compares keeping the biological balance in the cell to running a restaurant kitchen. The chef should know what is in stock and what needs to be ordered before starting to prepare dishes. Gene production in the cell nucleus and mitochondria work in a similar way: The housekeeping and metabolic genes must be coordinated and informed via signaling pathways. To find out exactly how this connection takes place, Dr. Akhtar uses a range of the latest technologies from microscopy to genomics, such as acetylation profiling or the sequencing of the gene products from individual cells: “This way, we receive increasingly more precise information on how and where MOF binds, what happens at the molecular level, and which gene production is regulated.”

Thus, the onion is far from being completely peeled. Only just in summer 2020, Dr. Akhtar made another surprising discovery: The histone acetylation of the mother’s genes – the recipe comments for the gene kitchen – are passed on in the egg cell and remain intact in the embryo. The tiny flies essentially carry the mother’s cookbook in their genome.