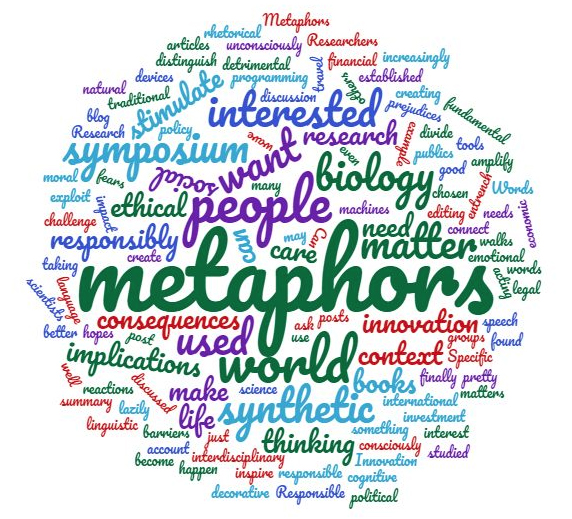 Research objects and processes in molecular biotechnology are often described by way of metaphors. This holds true for scientific publications as well as publications directed at a broader audience. For example, prokaryotes are described as “genetic machines”, cells “signal” and “communicate”, and supraorganisms and holobionts form “living communities” (Nerlich, B., & Hellsten, I. 2009). These metaphors can capture parts of molecular reality that are otherwise difficult to get a grip on by the help of purely scientific terminology.

At the same time, these metaphors come with ethical implications. First and foremost, they shape public perception and acceptance of a technology. What is more, they have an impact on governance. It has been argued, for example, that the German law on human genetic testing (“Gendiagnostikgesetz”) exemplifies how genetic exceptionalism, to which the “gene machine” metaphor belongs, can lead to unwarranted specific regulation (Kiehntopf, M., & Pagel, C. 2008).

On this background, the project compiles and systematizes metaphors in molecular biotechnology. The project focusses specifically on technologies addressing (1) genetic, (2) epigenetic, and (3) microbial symbiotic structures. As a second step, the project assesses whether and in what ways technologically interfering with the relevant molecular target domains appears ethically justifiable given the metaphoric framings of these domains. Thirdly, the project identifies potential cases of over- and under-regulation of the target domains.

Publication resulting from the project